Welcome to the Official Website for the Jefferson Township Volunteer Fire Company (JTVFC), Station 29, located in Mount Cobb, Lackawanna County, Pennsylvania. Thank you for stopping by our site! Check back often because we are always adding new photos and information. We try to update the incident log, run photos and schedule of events as often as possible.

Jefferson Township is located in Lackawanna County, Northeastern Pennsylvania, approximately 10 minutes outside of Scranton. Our coverage area composes 34 square miles of rural terrain populated by 3,608 residents. We cover a busy six mile stretch of Interstate 84. Since we began serving the residents of Jefferson Township and surrounding areas, our call volume have been increasing and a steady rate. We provide Fire Suppression and Rescue Service to the second largest township in Pennsylvania, Jefferson Township, with our fleet of one Rescue Pumper, one Engine, one Brush Truck and one Tanker.

Over the years we have also begun to update our fleet of apparatus to meet the demands of today's emergencies. In 2003 we purchased the first brand new apparatus for the company, a 2003 Ferrara Rescue-Pumper that served as our first due apparatus on all motor vehicle accidents and structure fires. In October of 2006 we were grateful to receive a FEMA grant in the amount of $238,000 to replace our 1981 International Tanker. In August of 2007 the company received even more good news in that we received another FEMA grant in the amount of $275,000 to replace our 1973 Engine. We were the first department in the country to receive two apparatus grant awards, two years in a row. These awards proved to be a benefit to the residence of the township, allowing us to still provide our services without any major tax increases that may have been needed if these grants were not received due to the rapid deterioration of our equipment. In 2014 we replaced our 1986 Brush Truck with a 1993 Ford F-350 Brush Truck. In 2017 we purchased a 2003 Command Vehicle to be used for nuisance calls, incident command, transporting firefighters to and from training classes and official fire company business.

We are members of theNorth Pocono Fire & Rescue Association. 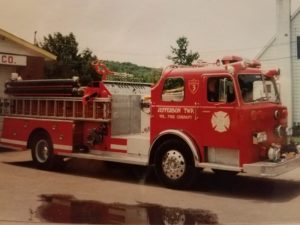